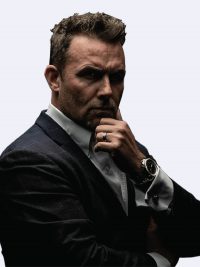 Brad Lea is the founder of Lightspeed VT, the most advanced training platform on the market. Soon-to-be billionaire and host of the Dropping Bombs Podcast, Brad Lea built LightSpeed VT into a multi-million dollar global tech company from scratch. As its Founder and CEO, his vision led to LightSpeed VT becoming the world’s leading interactive training system – a system that he’s proud to share with others. In addition to being a CEO, Brad is also the author of The Real Deal. and creator of The Bottom Line YouTube series.

Brad has helped generate millions for countless companies and individuals, including heavy hitters Tony Robbins, Zig Ziglar, Grant Cardone, Tom Hopkins, World Series Poker, Top Chef, Chase Bank, and so much more. He’s also been featured in Forbes, The Huffington Post, Inc. Magazine, GCTV, and is a regular guest on several top-rated podcasts such as The $ales Podcast, Success is a Choice and The Inner Changemaker.

In his free time, Brad enjoys traveling, fishing, and spending time with his family.

If you would like to speak with Brad, fill out the form below: